This week has been a mixed bag of rides. I was busy with work so his riding schedule was pretty light which I think contributed to his mood by Saturday.
As mentioned before,  Zeke loses his sh@t over mosquitoes. That contributed to the poor rides this week. Saturday, Zeke must have woken up on the wrong side of the bed. He was cranky he didn’t get to go out and play during breakfast (my uncles fault) then decided he wouldn’t go through the gate. He would back up or go sideways or go any effing direction other than forward through it.

Getting to the barn he was actually quite good. I chased him around (even though he really didn’t need it) and tacked up to ride inside. Then the idiot wouldn’t walk close to the mounting block.  Same as when he wouldn’t come through the gate. He planted his feet and would go backwards, sideways and I had to get help to get him to go forwards. (Everytime I go to give him a smack with the whip or rope I have with me he go sideways or backwards so I can’t get behind him.)

Once I was on him he was quite quite good though.

We started with trot poles and did a little course which he totally nailed. After that we did a course of x’s. OUR FIRST LITTLE COURSE!!!.... KIND OF haha. He basically crawled over the xs and even knocked a couple over. But other than being a bit wiggly he was quite good!

It shows up on the flat and especially with jjumps. He doesn’t totally respect the leg and doesn’t like to go forward. When you put your leg on he sometimes tucks his head of comes up above the contact and slows down. The wigglynes comes from his head coming up off contact and not going forward when I squeeze.  The suggestion was to follow the contact whichever direction he goes. Not to hold him but to artificially create it a bit so he cant evade it and will eventually learn to push into it.

It definitely improved and we then moved on to doing some canter poles in both directions. The left was as always better than the right but both were quite good. The canter just needs a lot of work.

We cooled out outside where we rode with 2 other horses!! That were a non issue even with a bunch of wind. We also walked over flowers which were a total non issue. Woohoo!

After the lesson I untacked and went to leave. Guess what… the baby wouldn’t leave the barn…. Bah.. the habit it getting really old.

When we got home I unloaded and led him into the barn where he proceeded to try to nip my arm coming in.
Then because I’m the best mom ever.. I made him a toy which he thoroughly enjoyed as you can see haha. 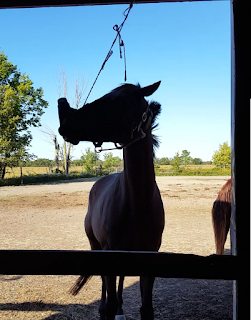 Just one of those no good very bad days..

One of those days..

Tonights ride was... lack luster. I had some errands to run after work so didn't get on until about 650. This is cutting it super close to sunset and with the warm weather hanging around (I'm not complaining!!!!) mosquitos. There is definitely something I've discovered about Zeke. Flies the baby will work through. Mosquitos and his world is ending. He was bulging back to the barn... so violently shaking his head and biting at his sides he was almost throwing himself off his feet and even when I got off of him he just would not stand still.

I got about 20 minutes of good work and it just became not worth it. I was frustrated.. he was frustrated. No fun. Finally with some walk figure eights both directions where he didn't totally ignore my leg I called it quits.

It is really interesting how he rides at home (in a 100 x 200 foot pen that doubles as their turnout and is attached to the barn) vs anywhere else on the property or trailered over to my lesson barn. Anywhere else and he is all business. Here he always bulges that little bit extra... right turns are sketchy, you might as well not bother cantering to the right. In my lesson on Saturday all he wanted to do was cut in going to the right at the trot, was an angel to the left and had a stunning well balanced canter to the right where as to the left he was all over the place. There's nothing like them making a liar out of you right?

Sigh... Lesson learned? Don't even bother getting on after 6pm.
Posted by Lindsey @ Zeke the Geek at 22:16 No comments:


On August 11th , 2016 I signed the paperwork on my new partner. Baby Zeke is a 16hh 2012 thoroughbred gelding whose JC name is Awesome Sting. He had 6 races and was off the track for 2 ½ months before he ended up with me! 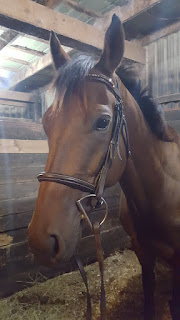 Zeke was born down in Kentucky and raced all 6 of his races in Florida. His breeders knew he wasn't going to make it on the track as a stakes horse and sent him up to their other farm up in Toronto. 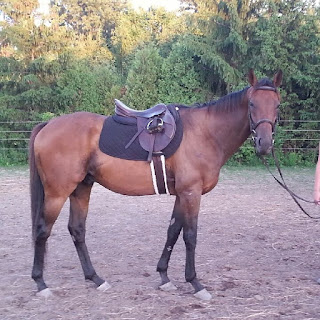 The last month has been full of getting to know each other but so far he is proving to be a smart (almost too smart ) baby.

September 10th was his first off property trip. Aside from getting off the trailer and being a little wild it didn’t take him long at all to settle. After a quick run I tacked him up and he went right to work. Walk, trot, Canter both directions in a strange indoor. He also tackled trotting poles and was introduced to riding in company (reeaaallly not sure about that part... babies can't be perfect).

This past Saturday was lesson # 2. This week it took less than 10 minutes to settle and get to work. We introduced small lengethings at the trot, shortens at the trot and our first baby spirals (with some mixed results) Spirals to the left was awesome!! To the right... well...they need some work. Frustrating part is when you have to admit that 90% of the problem is rider error…Novel idea right? If you ride properly baby horses go nicely… get handsy instead of properly setting him up and ridig from my leg… not so nicely.

In the first month we’ve tackled:

Goals for the month!