Ahhhhhhh I have never been so proud of something so silly. We actually BEAT people!!
Pretty cool considering I seriously didn’t think I was going to be able to get on let alone finish an entire course with all the commotion. Definitely a proud mama moment. 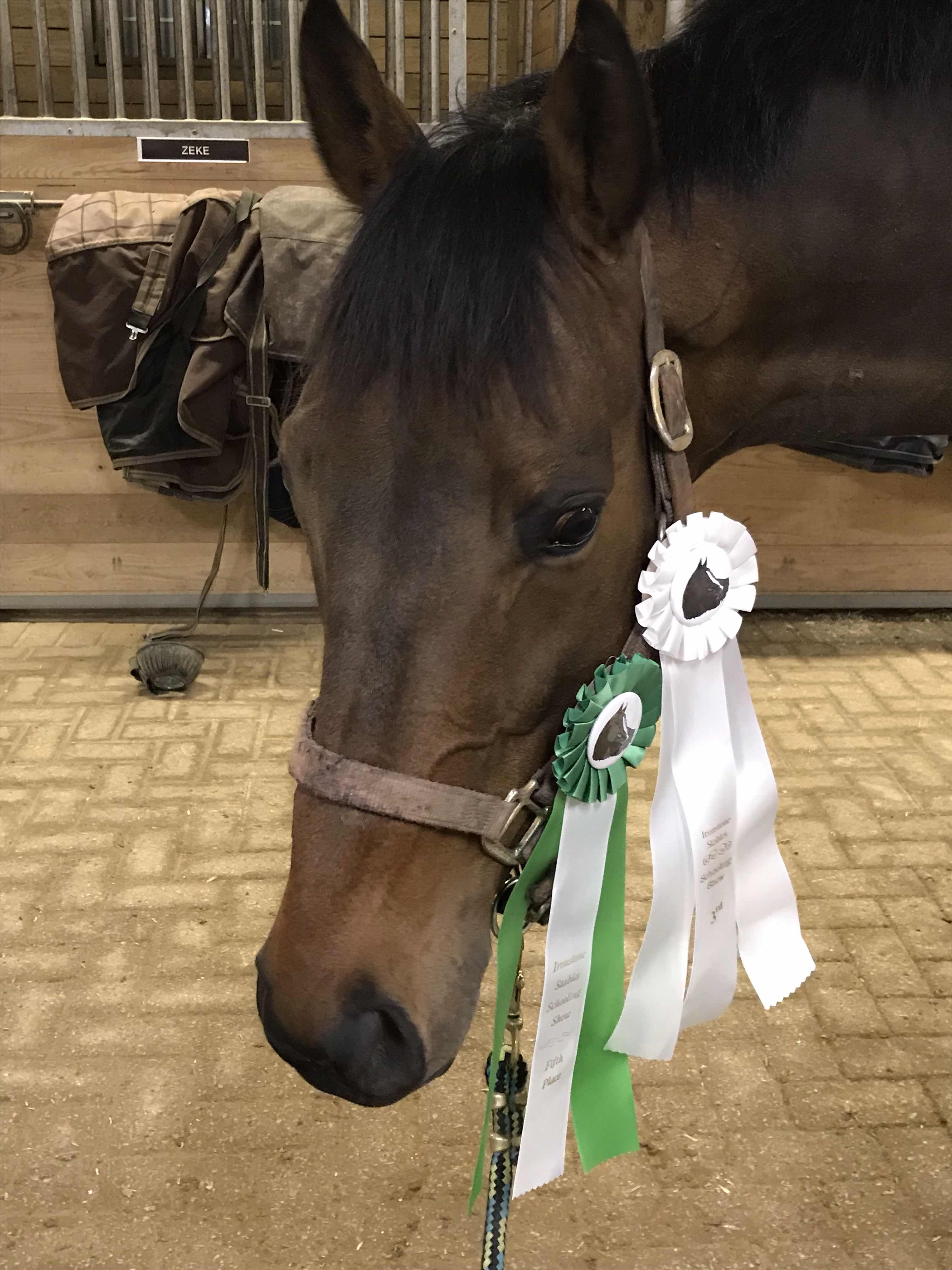 If ribbons keep being a thing he might even get a halter upgrade.  😁
It wasn’t a huge division but some of the horses were pretty fancy (one was a fancy large pony who has competed at the Royal multiple years and another was a push button packer type) so it’s pretty cool to ribbon in the 2 classes we did against 7 other horses.

And we have a false start... Again

So our great showing debut was scheduled for this past Sunday!
While no media, I swear Zeke knew he needed to keep his shit together. We had the best and most consistent course work we’ve ever been able to produce with courses of 10-12 jumps. But sadly our lovely Canadian winter had to finally appear.Womp womp   ☹️ 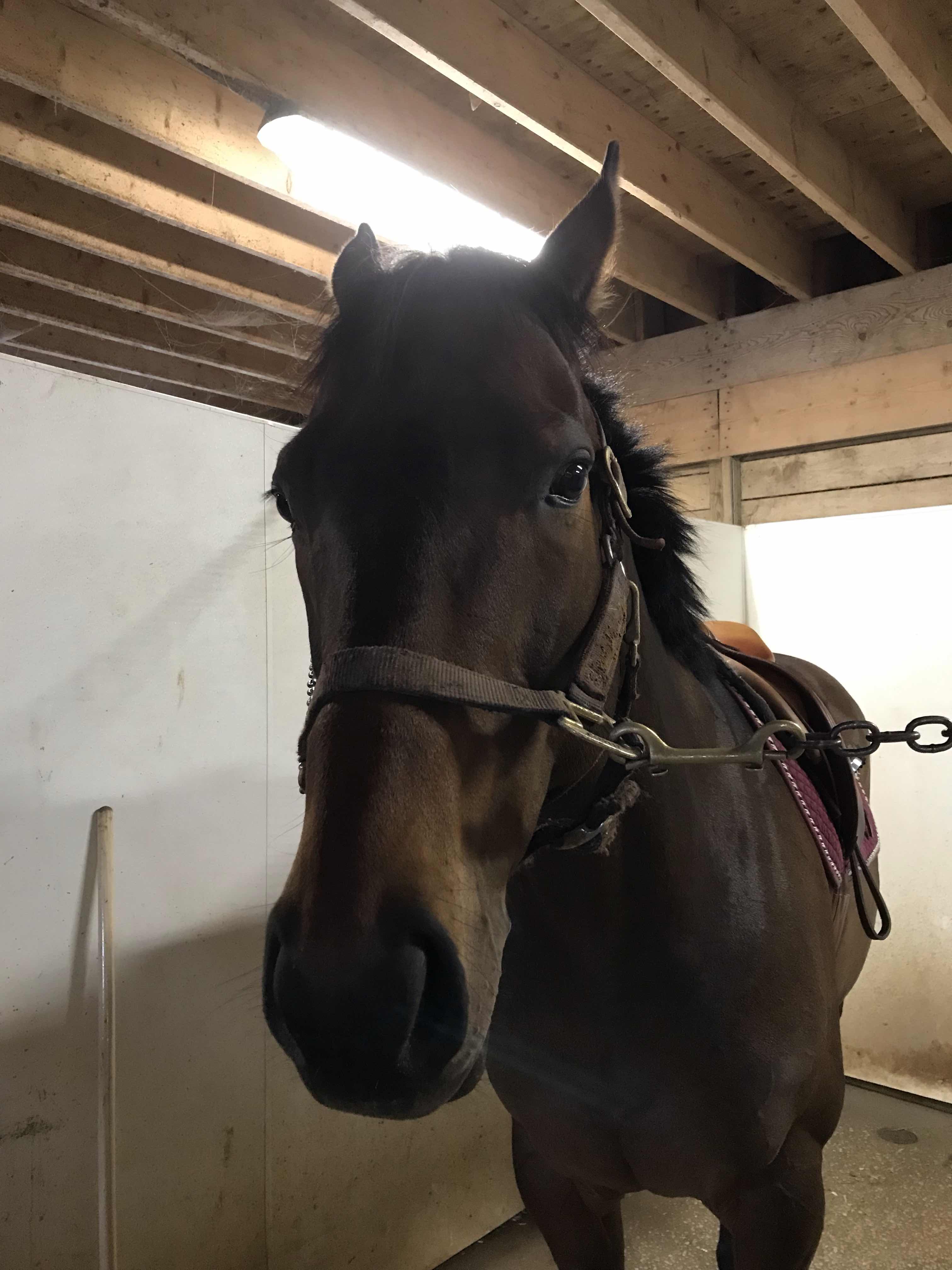 They ended up canceling the show due to the blowing snow. Our next attempt Is February 10th! I like to think some things are meant to be so maybe we just needed those few weeks extra practice?
Either way hopefully we’ll have some time to go for our annual snow ride and hopefully maybe kind of get our changes down??????
One can hope right?
Atleast one of my creatures is enjoying the snow!! 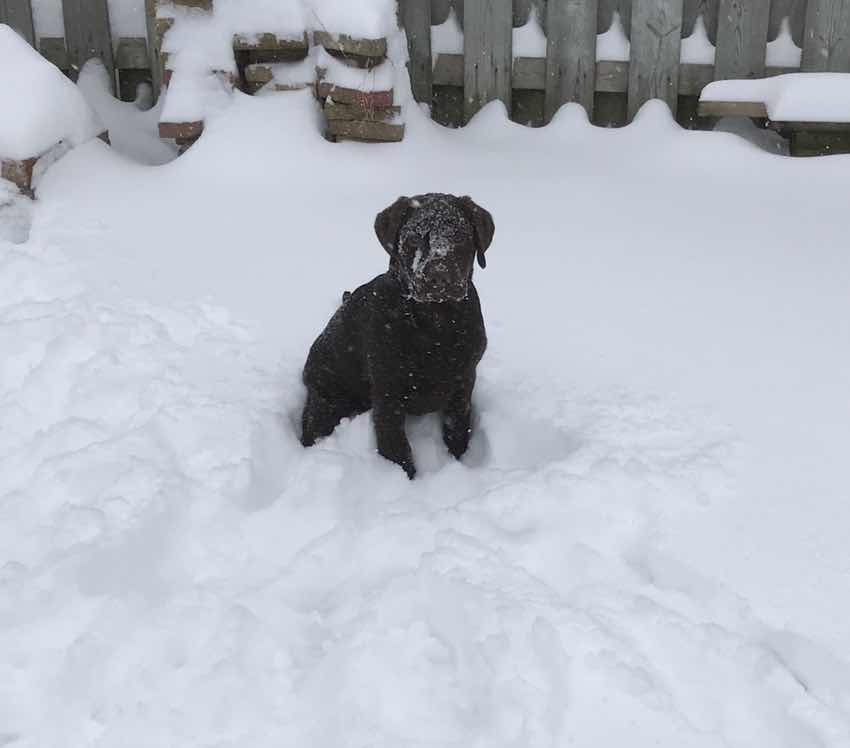 So while we are way further ahead than we were last year we definitely didn’t hit all the goals I wanted.  I can’t make myself me all that upset about it though since we HAVE learned a ton. 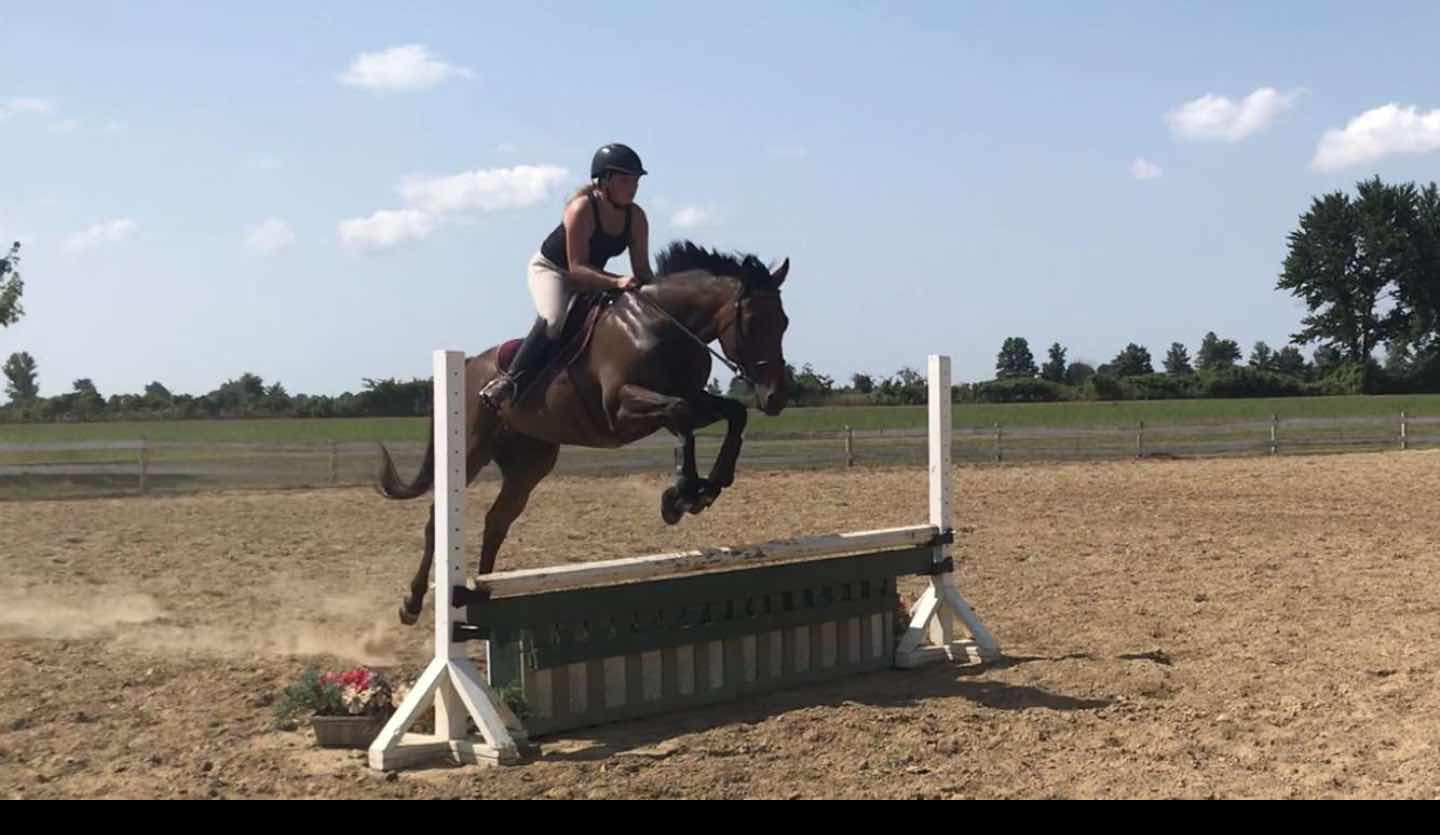 Let’s bring back the nice weather too eh?

Zeke is definitely a horse I wish I would have owned a decade from now but he really is the best teacher. I do think it’s about time we got some legitimate progress done though. So here are some goals I’ve set for us that I DO think are completely attainable. 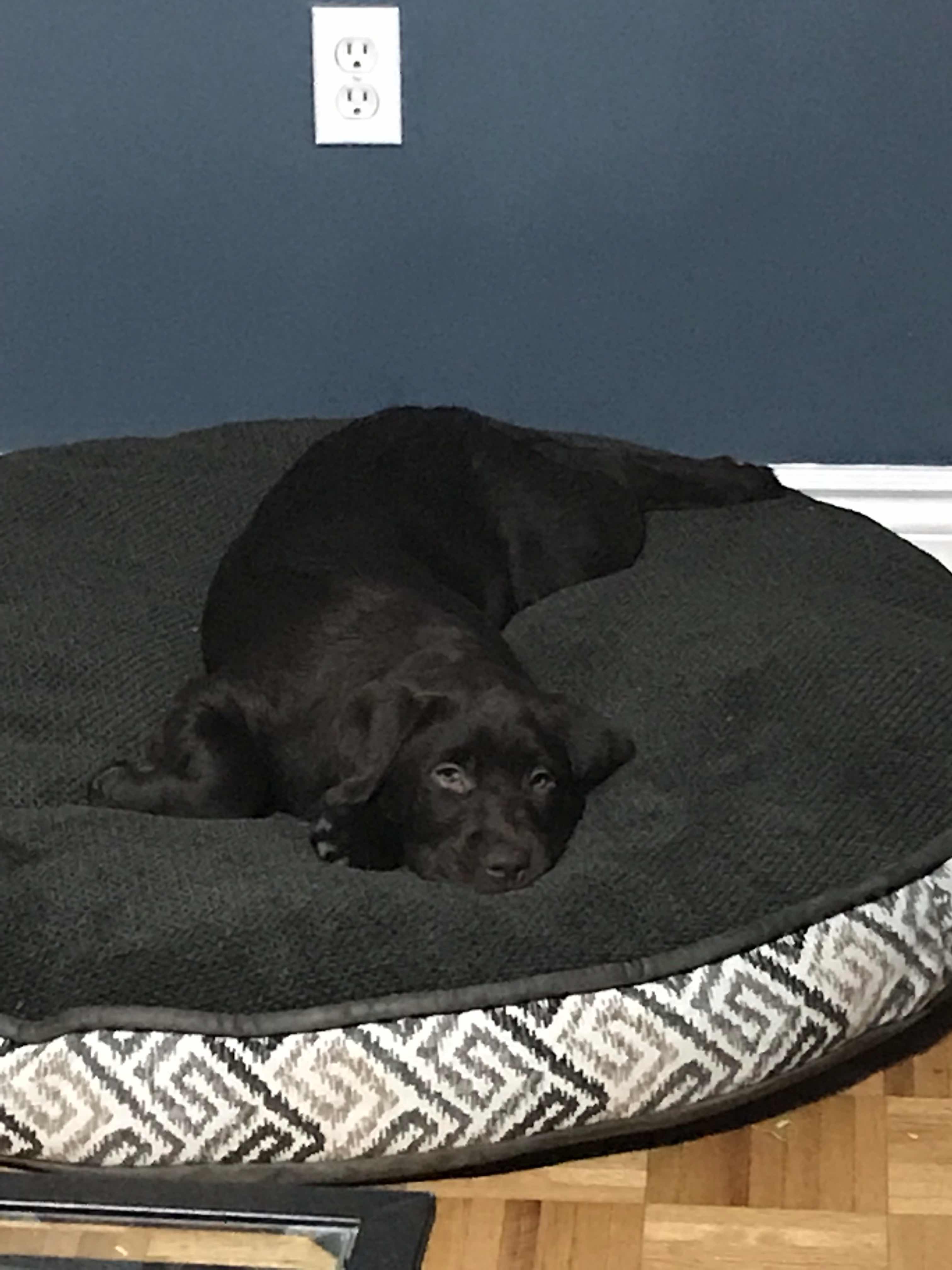 1) Confirm Zekes changes
- Right now he’ll do them but he needs a lot of help. I’d like him to be comfortable enough with them that we can do them consistently on course. His biggest struggles are being behind the leg and crooked (really just a product of being behind my leg) once I can get those problems out of the way we should basically have a consistent change.
2) Trailer somewhere atleast twice a month come Spring
- My brother is doing some body work on the trailer and my aunt has offered me use of her truck whenever I want it. I have zero reason to not get this done.
3) Incorporate atleast 1 ride a week that is devoted to poles and caveletti.
- the only reason I don’t already do this is pure laziness. Zeke is a horse that gets bored and I get unmotivated especially being stuck inside. Time to make this a regularly occurring thing.
4) Continue to have fun and learn with a healthy, happy horse.
- Zeke is a funny little horse with some big opinions. Changing things up regularly and making sure he’s happy with his work is super important. I want to do my best to make decisions that will benefit his state of mind to make sure him AND I are still having fun. 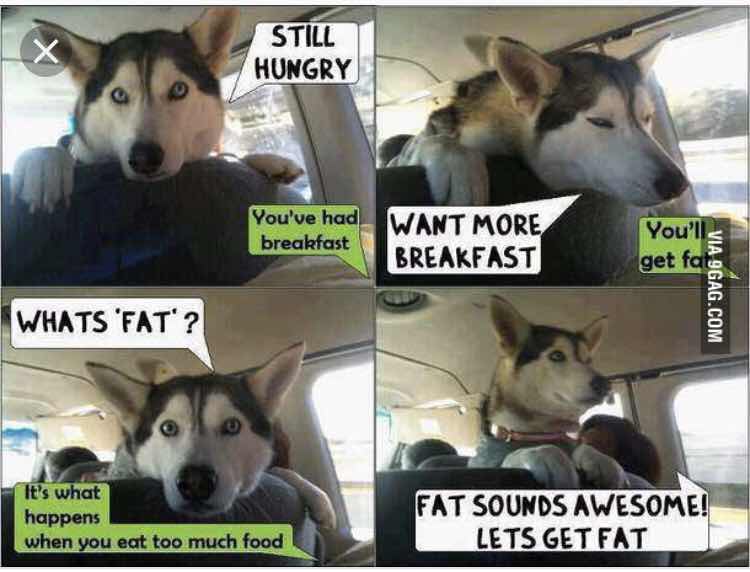 4) Take a couple lessons on a horse that actually knows what they’re doing
- I went from lesson horses to a fresh off the track tb to a 2nd OTTB right off the track. I’ve never ridden something that was actually experienced jumping. I’m finding it difficult as Zeke and I progress as it’s becoming a blind leading the blind situation.
These goals are all something well within my control and grasp as long as I stay motivated and on task.
Posted by Lindsey @ Zeke the Geek at 15:14 1 comment:

I’ve been a blog lurker since the inception of the Blogger Secret Santa Gift Exchange and have always been amazed at the thought put into all the gift givers out there. I was extremely excited to participate this year and it definitely did not disappoint.
My gift was from Heather over at  “Gray Flannel Horses”. I apologize but other than pasting her link I can’t figure out how to link her here.
http://grayflannelhorses.blogspot.com/?m=1 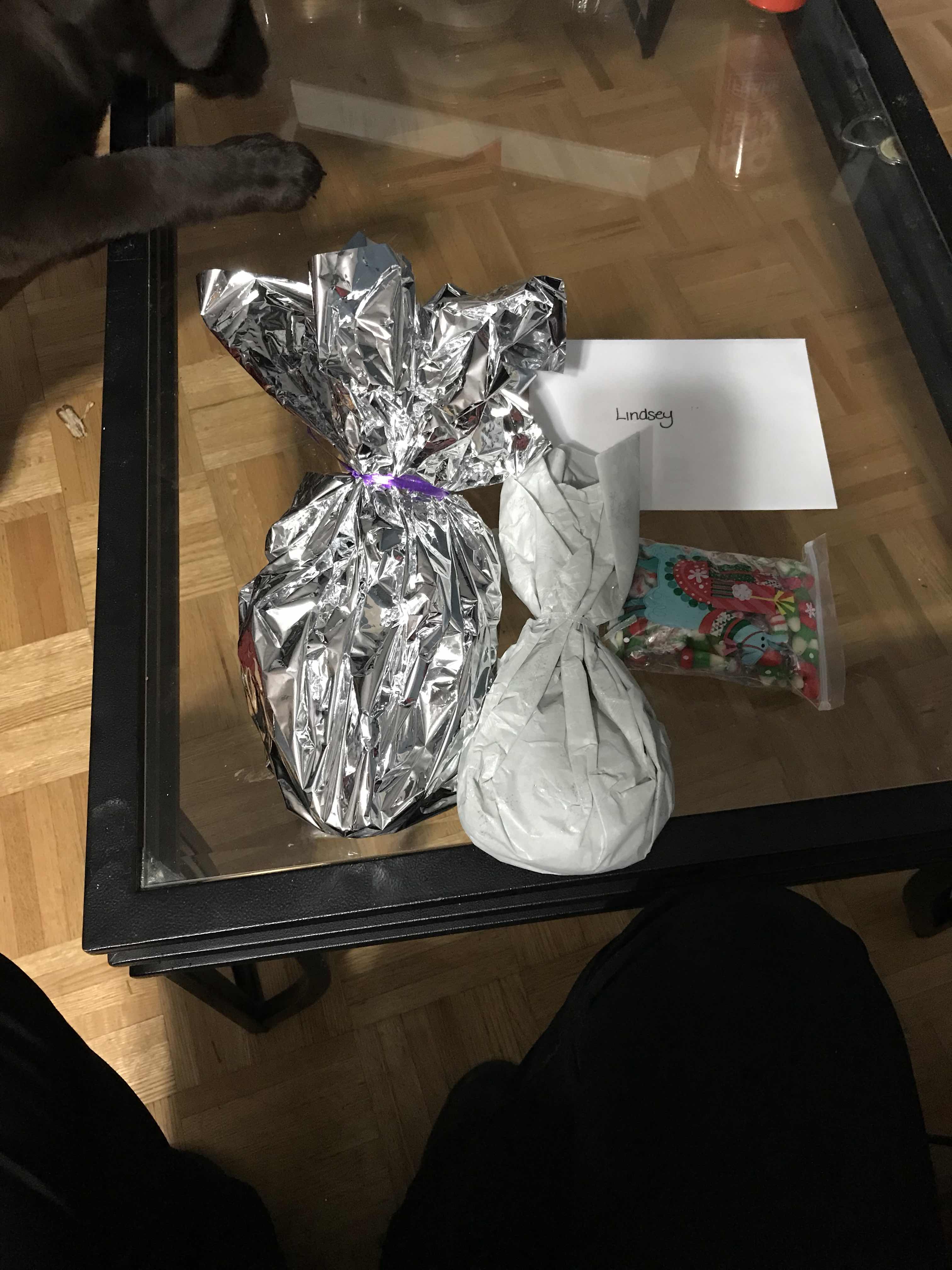 As you can see I had a little “helper” giving me a hand opening the packages....as well as stealing the silver one briefly haha.
Heather knocked it out of the park with a custom ornament (already up on the tree 😁) a brush that I THINK she painted herself (she did a wonderful job if so) and some treats that Zeke is definitely going to have to share with me. 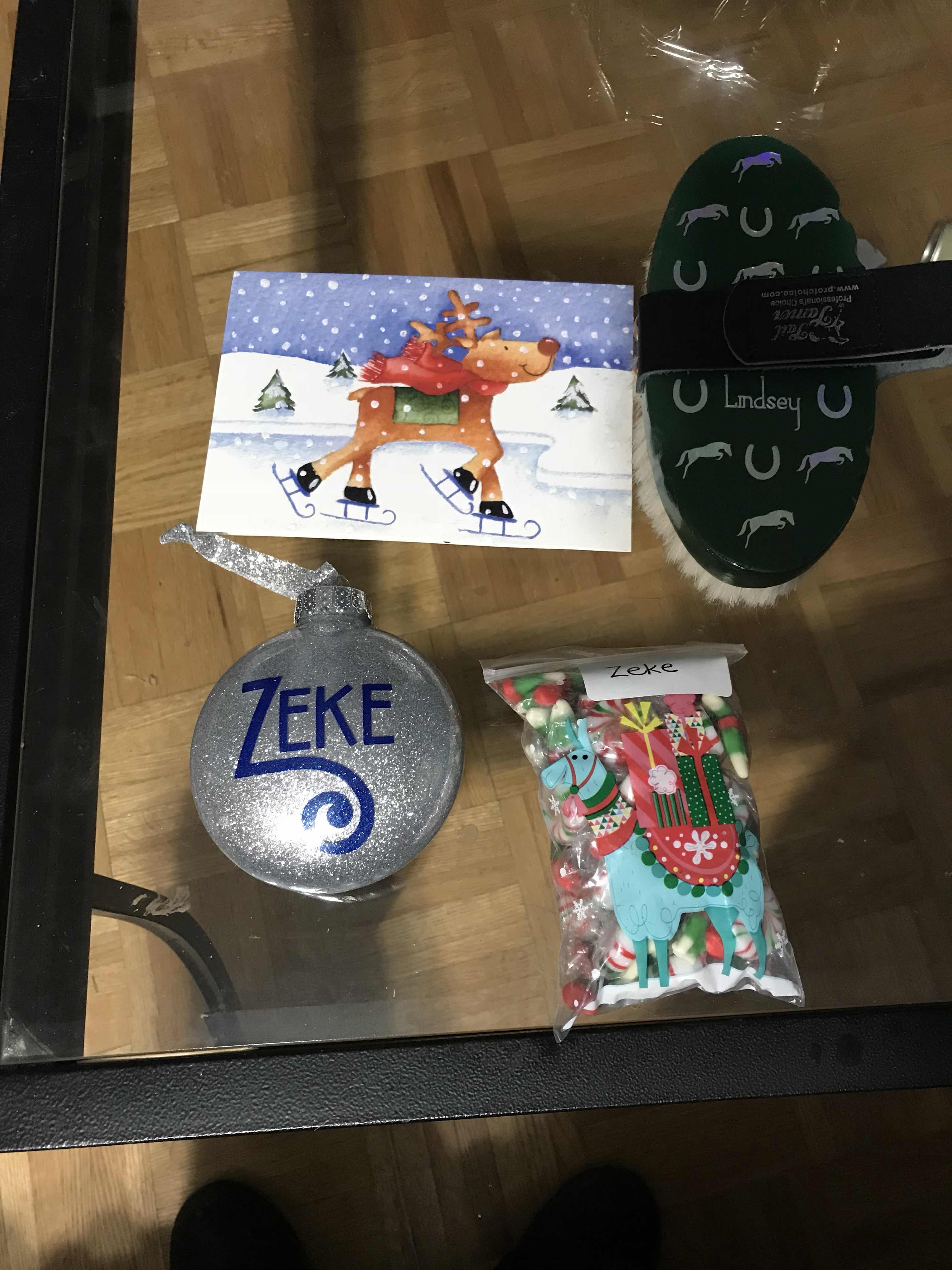 The brush in particular is a timely gift as I have never actually purchased any brushes ever and the ones I’ve found/stolen are starting to fall apart.
Thank you so much Heather (and Cisco and Phantom)
Ps. I just shipped my gift today so hopefully it makes it there on time!!
Posted by Lindsey @ Zeke the Geek at 14:32 2 comments: 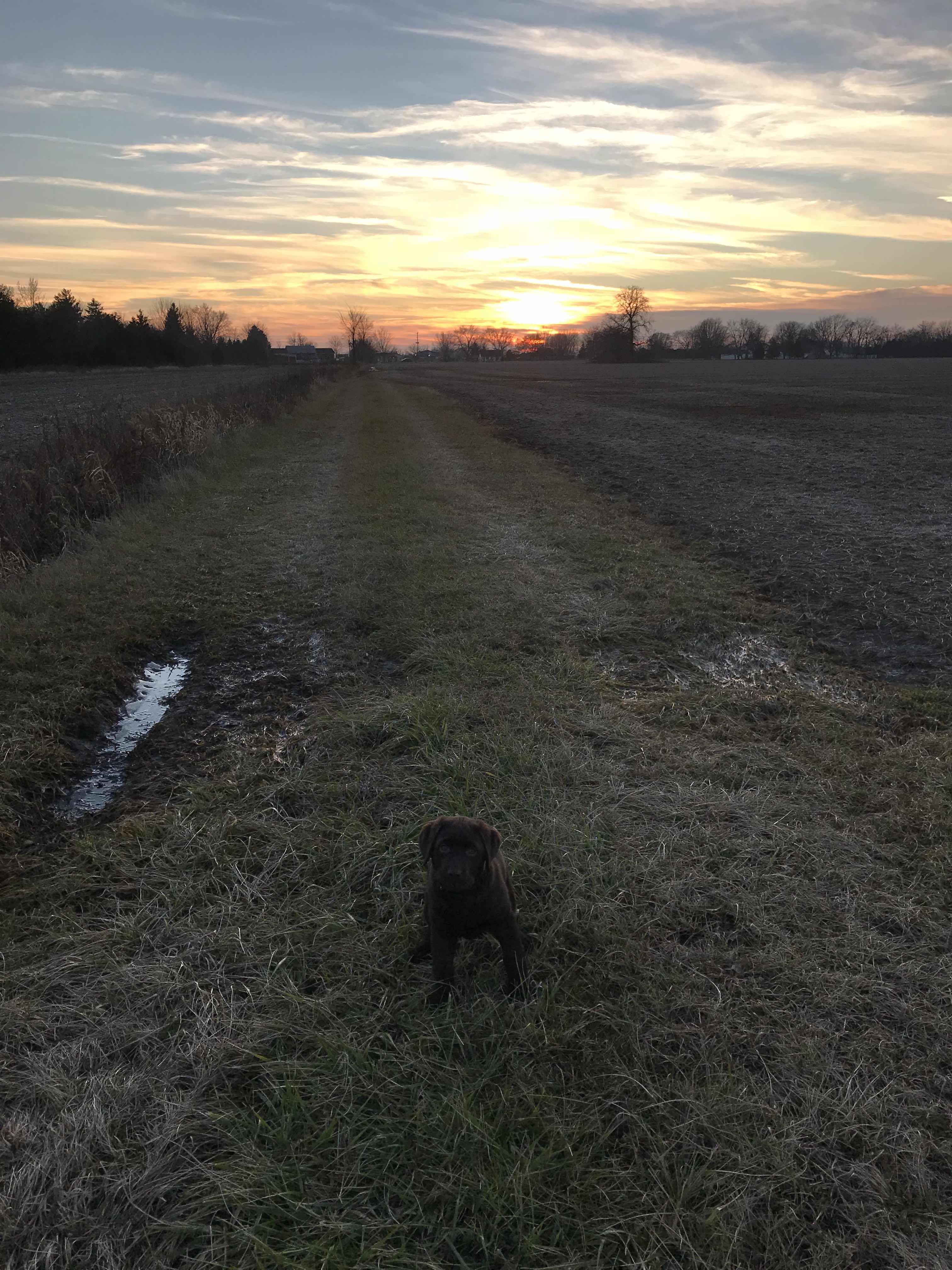 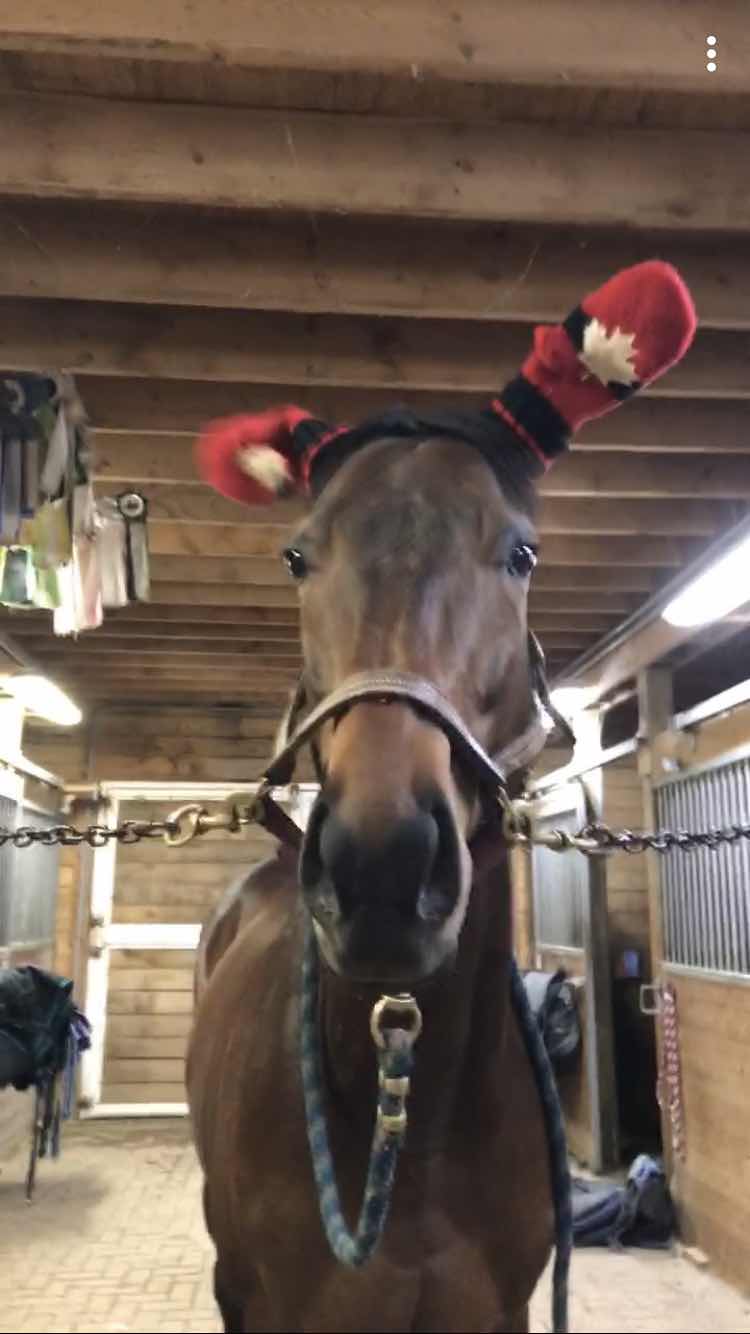 So I mentioned I had a new addition coming to my house and she’s finally here! 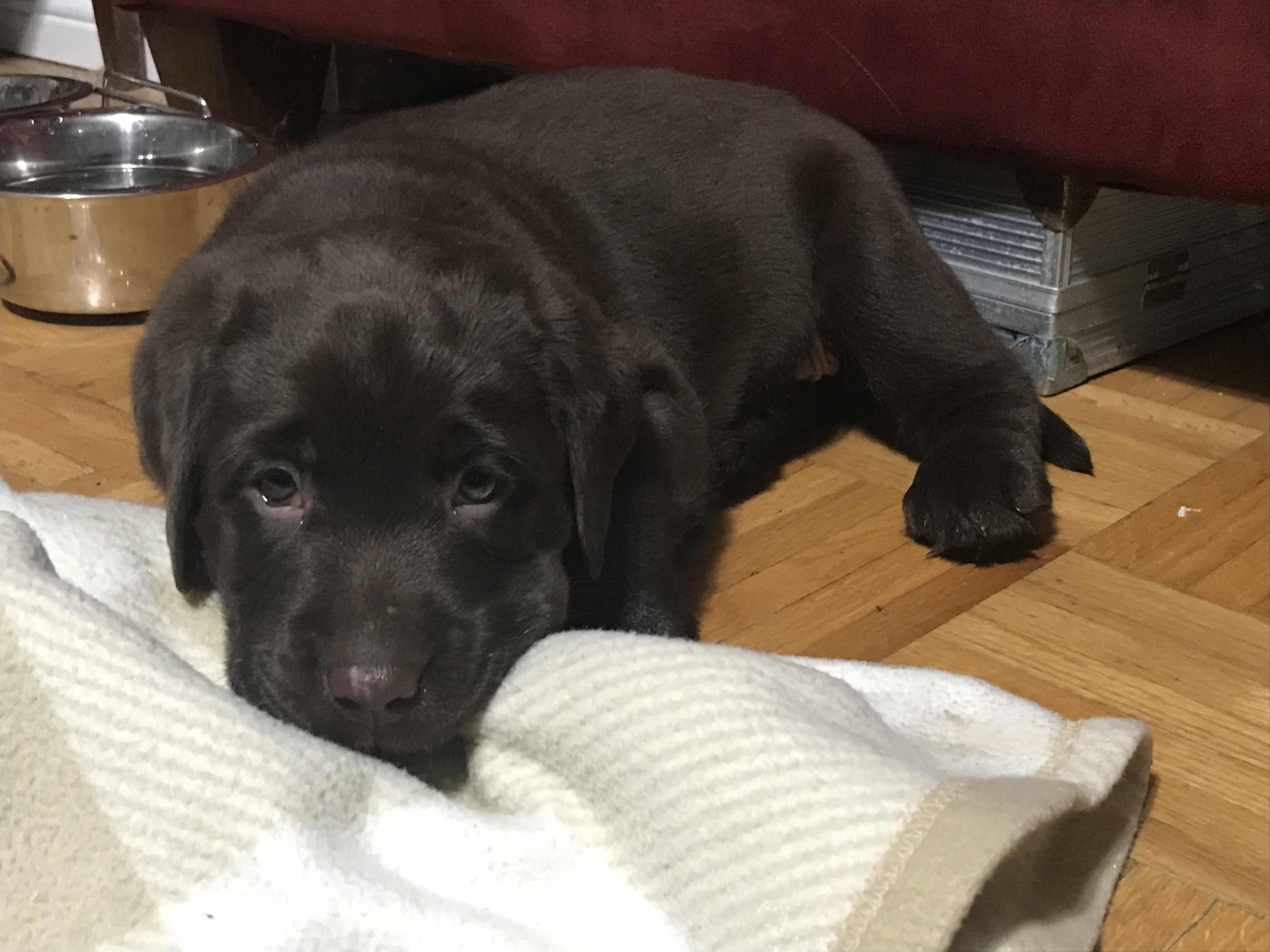 This is Ren my new chocolate lab puppy. Mom was 75lbs and dad was 85lb so I’m expecting her  o be a big girl.
So far she’s been super simple and is already catching on to stairs (up is way less scary than down..) and will sleep a 7 hour stretch or so at night thankfully. She’s already been to the barn which obviously was super boring. She also thinks fresh shavings are the most fun thing ever! 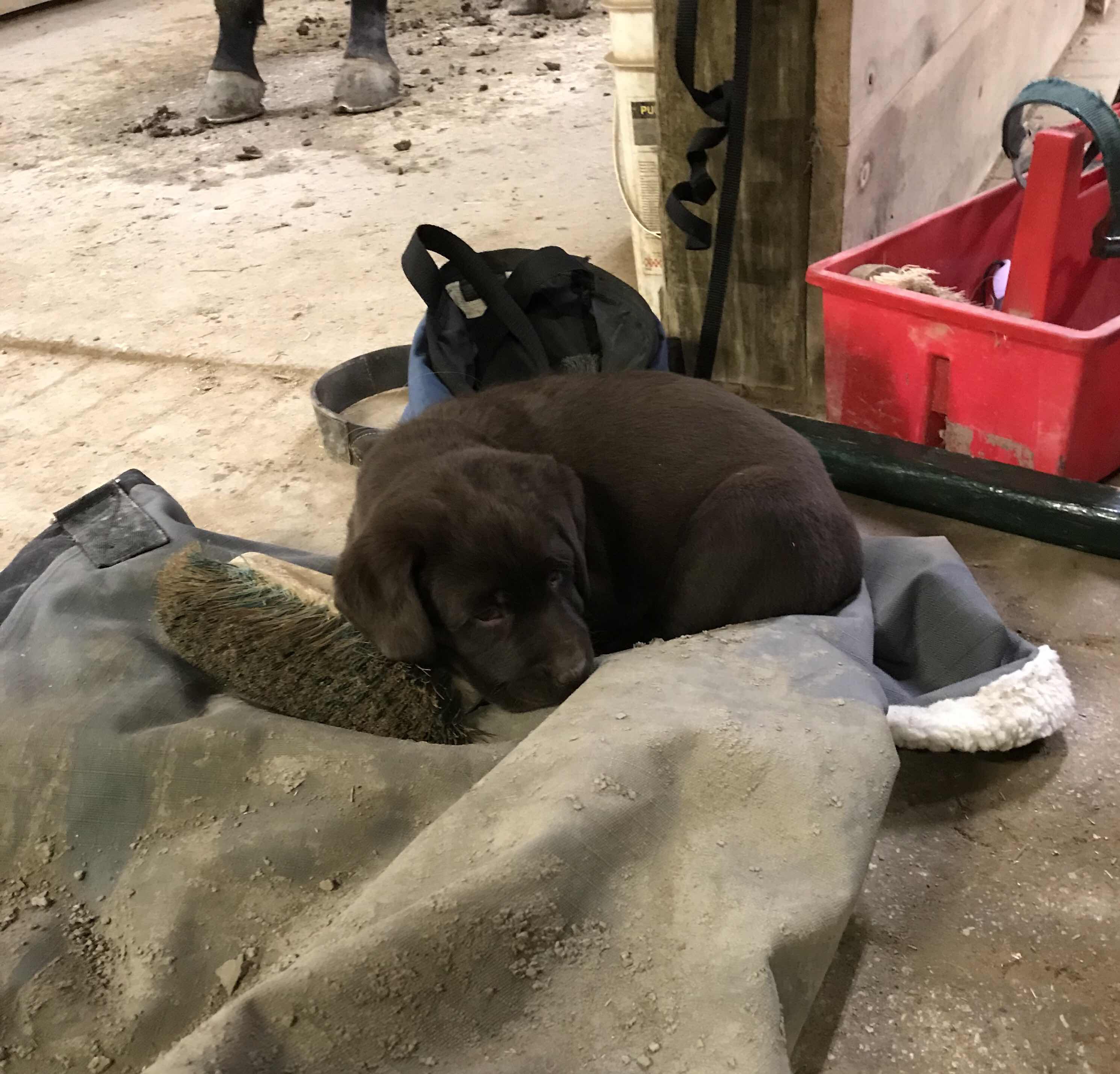 I’m really enjoying her so far and am hoping for many years of fun!
On the horse front... I wasn’t optimistic about my lesson this past Saturday as Zeke had been ridden....once since my last one haha. Thankfully other than some minor sass he was great.
We worked on a little gymnastic focusing on making him straight all the way through as he loves to drop his hind end to the inside. 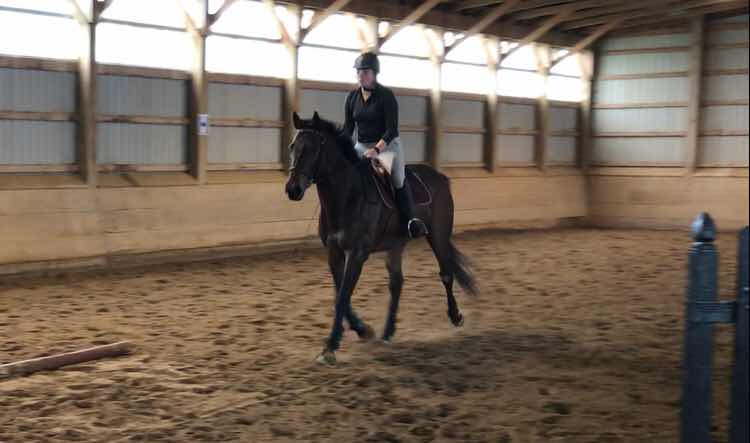 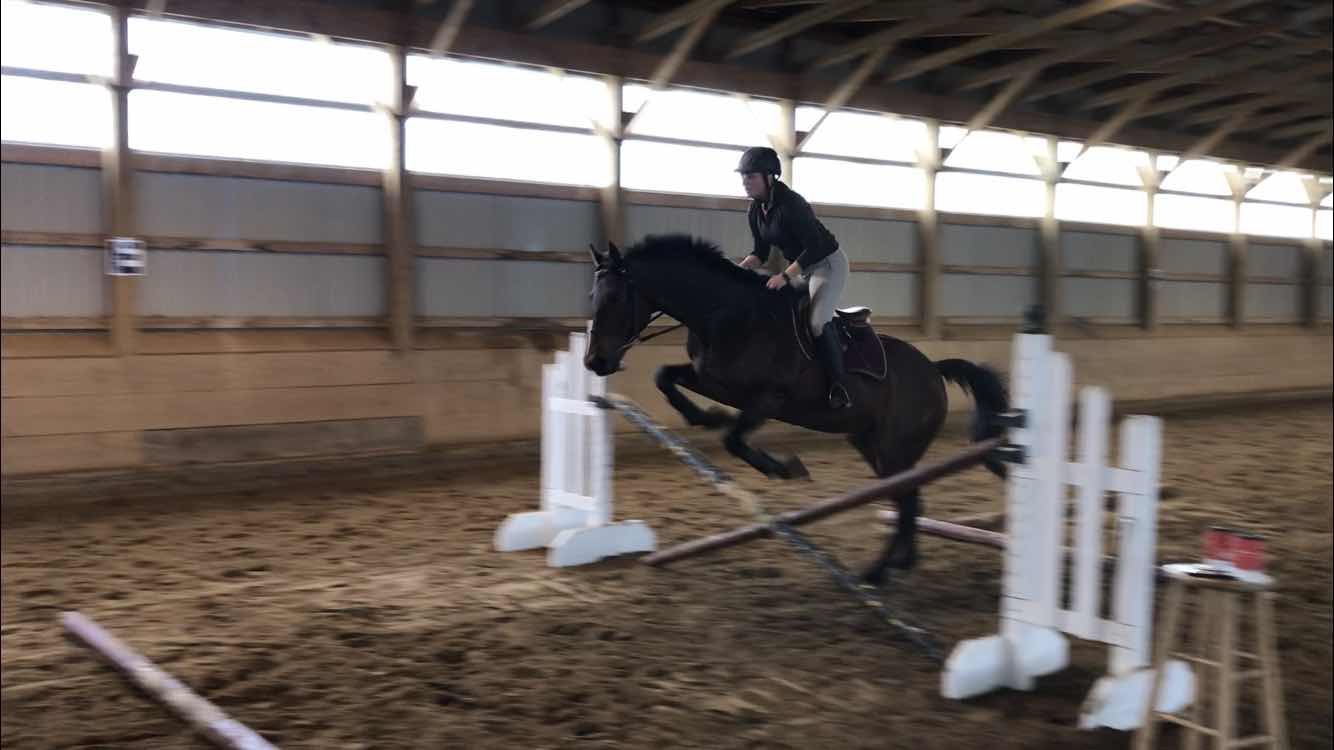 Our first show is December 9th where I very well could die so I’ll try and get my Secret Santa gift shipped before then.
Posted by Lindsey @ Zeke the Geek at 08:44 2 comments:

I so suck at this

So a lot and equally nothing has happened.  I’ve had a lot of changes work wise that affected my time available as well as financials. Zeke (my gelding that should be a mare)horse did his typical 2 steps forward but 1 step back situation. 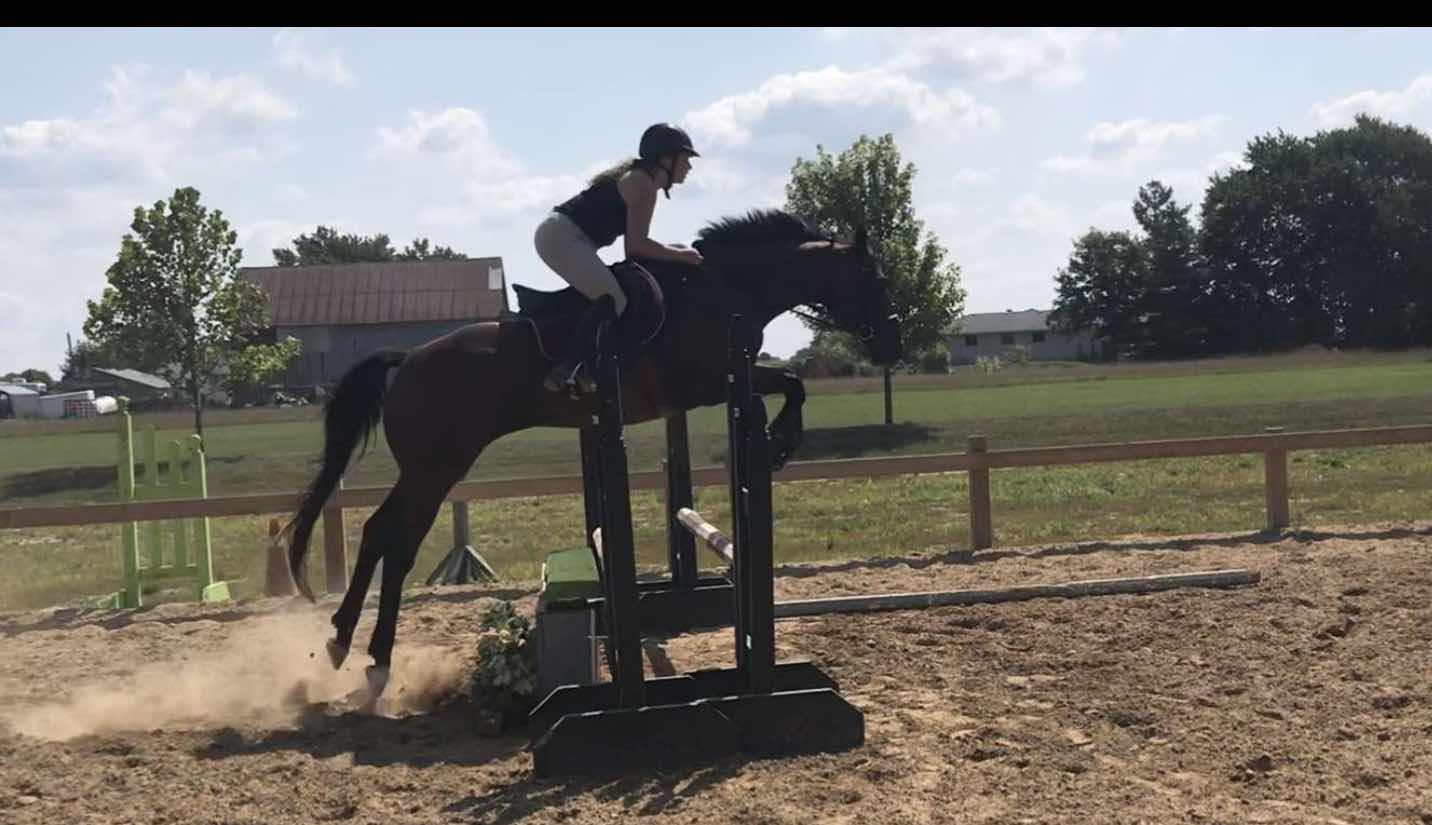 I love this sport but sometimes it’s so frustrating. Looking forward I’m hoping for much more time and money to devote to it.  There are some changes  coming in the next few months that should free me up financially and relieve some of the stress I’ve been encountering.

I have been a huge fan of the he rest of the equestrian blogging community so I hope to contribute as much as I’ve gained from them. 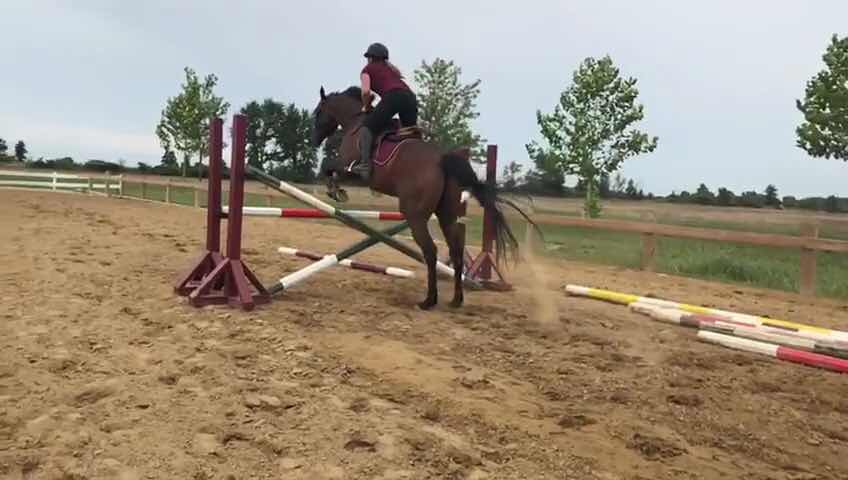 Also...... in t minus 6 days there will be a new addition to my little household!!