Now... Considering Zeke is a baby (some days a very dumb baby.....) these are very loosely based and probably (hopefully?) conservative

-Lose 15 pounds
-Re commit myself to my work. My dedication has been slacking a little since the end of my last position
-Meet my yearly budget
-Run a Tough Mudder
-Read atleast 12 books a year (I stopped reading from lack of options)
-Blog atleast Bi Weekly (mainly to keep a training log)
-Get more riding media (This is a very useful tool to evaluate our current weaknesses)

January
-Ozz was becoming a fire cracker under saddle due to lack of work.
-We were jumping 2' courses with fill and landing the correct leads
-Ended up moving him to Ironstone for a few months so he could be ridden consistently


February
-This was the start of saddle shopping for me and attitude for Ozz
-I ended up purchasing a Stubben Edelweis and Ozz continued to battle with a severe attitude under saddle.
-Started him on muscle relaxers and some hand walking.


April
-Had a training ride on Ozz in which he feels stiff but not overtly lame but acts the same for Seana
-Had vet out for another opinion
-It was determined he had severe hock pain and SI pain. Hocks were going to be injected.
-Quit my job that was literally stressing me to the point of sickness. This was probably the most necessary and important decision of this entire year.


May
-Hocks were injected and more time off was had before bringing him back to work.
-3 weeks of rehabbing and zero attitude changes
-Vet comes out for 3rd evaluation and basically says he's falling apart.
-Further diagnostics weren't pursued as it didn't change the treatment but it was guessed he had super thin soles and would need pour in pads, a front left ankle issue, SI issue and a return of his ulcers.
- Decided Previcox was the way to go


June
-Ozzy was officially listed for sale after a couple weeks of rehab work.
-I also started my new job with a company and boss who is wonderful to work for.


July
-Found a wonderful family in Harrow to purchase Ozz.
-He is a beginner safe trail mount and a companion for the daughters jumper. It was literally the perfect situation.
-Horse shopping commences!!! 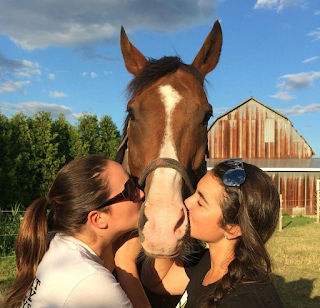 August
-After looking at a whopping 2 horses, I decide to purchase a quiet lazy gelding.
-On August 13th Wicked Sting officially gets delivered from Aurora and we start the lovely process of bringing along a 4 year old 16 hh goofball of a gelding that is right off the track! 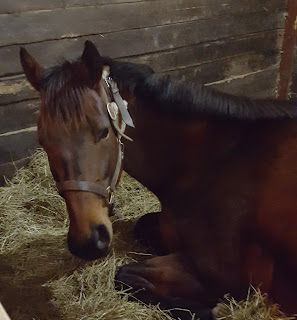 September
-This brings the start of lessons where I learn he doesn't care about indoor arenas, has a bit of a trailer loading issue and I only have to buy minimal tack for him!
-I also learn that he has meltdowns when ridden with other horses... this is an on going issue.


October
-Lessons continue. Zeke gets a bit spicier as the weather cools down and he doesn't get worked as much.
-We have officially trotted our first course of X's and begin to attempt small grids with.... mixed success.
-Semi have the trailer loading issue fixed


November
-Trailer loading isues show up full force. But I keep persevering and working around it.
-He is now up to 20 minutes to load both ways.
-Consistently picking up the canter better and intriducing lengthens and shortens at the trot. Great success here!


December
-Trailer loading comes to a head with it taking over an hour one night to get him to load coming home. I finally ended up beating him to get him on the trailer.
-With work at home our trailer loading tactics have changed. It is now a zero tolerance for stopping and planting his feet. Trailer loading must happen with a dressage whip.
-Also get my saddle looked at by a saddle fitter where it is determined it fits well.
-Someone also might have chewed on my saddle........ A$$ 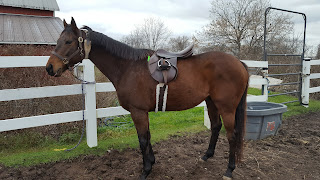 It's amazing how at the end of the year you don't feel like you've done much until you sit down and write it all down.