Even as seldom as I remember to update this it stands as a good reminder of how far we have come and how f***ing annoying Zeke used to be compared to how slightly less annoying he is now.

Just previous to Christmas after some targeted strengthening exercises Mr. Zeke was feeling much stronger but the canter in general always seemed to spark a fight. No matter how I cued, when I asked in the ride or even if I tried to use a gymnastic to encourage him to pick it up (either lead... at this point it really didn't matter) I was getting some none stop and escalating sass. The joys of being at the barn I am at is that I have wonderful trainers.


J is the head trainer at the barn with years and years of knowledge. He grew up Eventing up Toronto way where every year they would get a whole crew of OTTB's to bring along over the winter to show in the spring/summer and sell. He then switched to the Show Jumping world and competed with the likes of Ian Miller and other top riders. He certainly has some stories about those days..... Needless to say though, he was the reason I ended up interested in the OTTB in the first place. Also because of his years of experience he has endless tools up his sleeve to get the result you're looking for. In his words "If you only have 1 way to get result X and it doesn't work you're screwed. You need to have enough tools to have a Plan B, C,all the way to Z because not all horses are the same. They all have different weaknesses and baggage. It's your job as a rider to figure out what each particular horse needs".

S is the Assistant Trainer at the barn. She has 2 horses that are actively competing on the A circuit and regularly ribbons against the top hunter riders in Ontario. Both of these as well as many previous horses shes brought along from unbroke horses to 3'6 competitors. While she is only 30 she has years of experience with a variety of horses and is a tough but extremely fair rider.


These 2 have been invaluable in helping me with fixing this issue and giving me some pretty great tools for my toolbox moving forward.

S has been on Zeke twice with great results.

She had a few observations for me

1) In her words I've done a good job with him so far. Within 20 minutes he was going around nicely and had most of his buttons functioning. Horse's that haven't been taught those things don't suddenly acquire them that fast.

2) He is pretty tetbook in his evations and tendencies in the walk and trot.

3) I know what I am doing and my instincts are correct. Zeke is also more than aware of what I am asking. I can't let him trick me into otherwise.

Essentially what she is thinking has happened (and I will very much agree) is that Zeke is green and is struggling with typical green horse problems but with a very very healthy dose of attitude. Due to an unfortunate series of events which included me moving and his turnout buddy having hock surgery, Zeke lost some muscle in his hind end. As per the vet, he will always be prone to a weak hind end due to his conformation and  natural tendencies in his way of moving. This snow balled into a big issue as we were asking for harder things and he those things were hard for him. We were essentially asking a couch potatoe to go lift weights. Most horses would just continue to try to do as they were asked and the issue would go away. Zeke on the other hand started giving us all the finger. In his head, he could flail and drag himself into a canter (if he felt like cantering at all.... don't you know it's exhausting???) Traveling straight was also hard... Fuck you people for making me use myself properly...

Instead of nipping the behaviors in the bud and doing 1 big correction (like I needed to for trailer loading, and his planting of the feet and biting...why I didn't figure this part out is beyond me) I was nagging him. Oh, you don't want to pick up that lead right away? Little Tap. Oh I'm squeezing and you don't really trot off? Little tap. This all culminated into him getting pissed and resentful and me getting frustrated and nagging even more. Cue vicious cycle.

Nothing S did when she was on him those 2 times was unfair or cruel or violent. She just insisted he do things properly and didn't give him an option to opt out or there were swift and large consequences. Correct and move on. The vet confirmed that was no physical reason he couldn't do what we were asking so he didn't get to have any excuses. Seeing that he was able to correctly pick up both leads without fuss and without throwing his shoulders around was very eye opening. Games up bud....

Since we have addressed this (only took 1 major CTJ moment) we have about 1 discussion a ride and then he happily goes back to work. It's honestly like a night and day fix.

No more are the motorcycling corners, now more is the head flailing and threatening to bop me in the nose. No more is there bucking in the canter transitions. The most important thing to remember is :Don't get after him enough for him to buck you off. Get after him until he's just about ready to throw down then move on." Zeke is very much the horse that will come to the fight if he thinks you're being unfair but he 100% understands when there are serious boundaries as long as I outline them for him.

It's exciting to have my fun horse back. We won't be making the show for the end of February but instead we're coming out of this with a lot more knowledge and filling some holes that were bound to come back and bite us later.

I finally feel comfortable enough to set some plans for the rest of the year!

This past Saturday I took Zeke for his first (and mine) Snow Ride! For the most part being the drama queen he is he was fantastic. Barn friend, we'll call her L had her mare there as a baby sitter. As long as Zeke was right on her hip he was happy as a clam. We tried to have him lead and that was just way too exciting for the baby and his brain kind of fell out. Then L tried trotting her mare and the rest of his brain temporarily fell out. We ended on a good note walking 1 more lap around the field. All in all a success!!

Plan 1) More trail rides.
My goal is to have 2 trail rides per month the rest of the year weather permitting. Spring here is hard because we tend to get a lot of rain. But hopefully between trailering out and on property hacking we can get this done.

Plan 2) between the months of May through October Zeke needs to leave the property atleast once per month. Hopefully in the summer we can blow this away by heading to the western shows to ride around. Otherwise I have a few venues in mind to get him out and about

Plan 3) We will show in atleast 1 horse show this year. This was on my list of goals last year but for a variety of reasons didn't happen. I don't even care if we go in flail around and not ribbon in anything. I want some solid educational classes for the baby. The more he does the better he is.

Plan 4) I'm hoping for atleast bi-weekly updates here. I really enjoy being able to look back and see where we were months and weeks ago.


I also thought I would throw the progress pick in here... This is about 1 year in between photos... Baby is filling out! 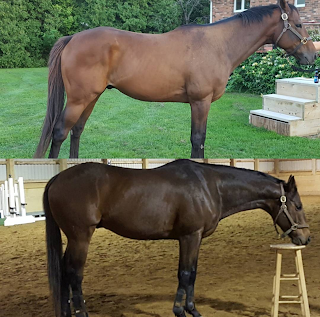